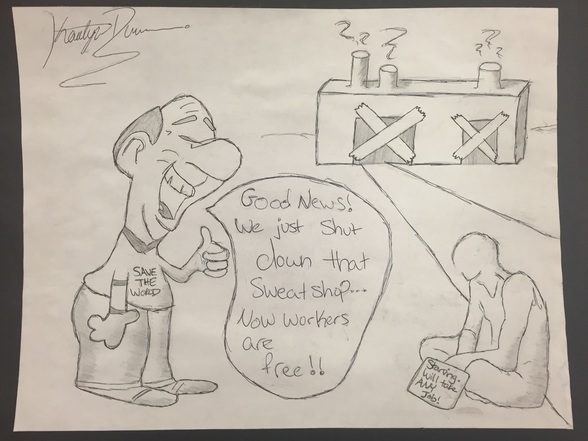 For this project we were given extensive background knowledge and topics pertaining to globalization. We were then asked to pick one of these topics to influence and use to create an opinion editorial and political cartoon. When doing to background knowledge section of this project I felt very passionate and on edge about the misconceptions of sweatshops and knew that was what I would end up doing for my project. So I spent a week finding and analyzing sources and articles about the pros and cons of sweatshops. The outline called for 3-9 carefully analyzed sources, 9 being the challenge option. To my surprise I got really into the research and ended up reading upwards of 20 different sources and analyzing 9. After the research we were to begin our Op-Ed and political cartoon. We each went through 3 op-ed drafts and 2 political cartoon drafts before finalizing the project.

After completing this project the idea of globalization has become much clearer. Before stating this project I knew these problems existed but I didn’t know there was a word for it. Previously I had never really thought about the negative effects of globalization and always thought spreading our culture and technology around the world was benefiting everyone, which is not the case. I think my biggest takeaway is the effects of the TPP which I didn't; think much of before this project. I loved the idea of learning about problems in our world today versus learning history. This allowed me to apply my learning in this class to the real world more easily, which I really enjoyed.

The writing for this project was definitely a lot different then projects I have done in the past and I really enjoyed it. If you know me you know I am very opinionated and feel strongly about a lot of things and this project gave me an outlet for all that built up anger towards global issues, especially sweatshops. This type of writing also gave me an opportunity to put more voice and opinion into a non narrative piece. Overall I really enjoyed the writing aspect of this project and it was different in a good way.
​
When I was first introduced to the political cartoon I was very against it, but as time progressed I was able to finish something that I was proud of. I'm not going to lie it wasn't my favorite part of the project and I would have liked an alternative but I think completing it made me understand the topic even deeper. There’s something about making fun and exaggerating an issue like that, that makes the topic even more interesting. In the end I enjoyed the op-ed a lot more but I still think the political cartoon was a necessary part of the project and helped me in the long run.