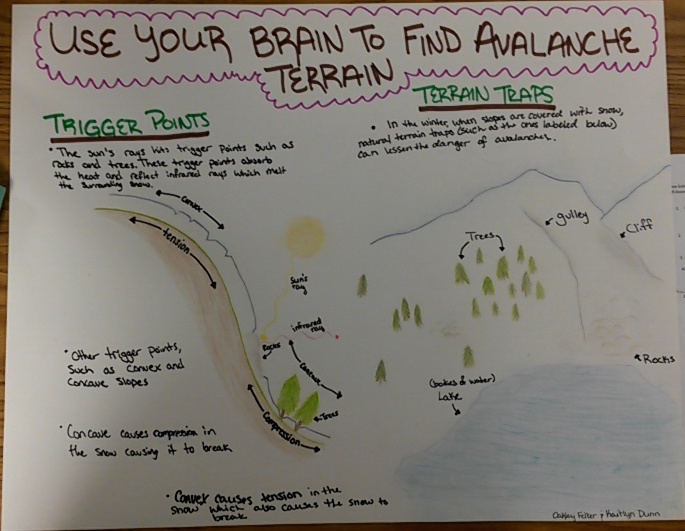 Snow science is relevant to my life in many ways. I live at Purgatory and frequently enjoy snow sports. Having this new knowledge of avalanche danger and snow awareness will help me to be more conscious of certain elements of danger. Throughout this unit many interesting facts caught my eye, one being about the Colorado river. A video that we watched on water conservation stated that water from the Colorado river was decreasing every year and the demand for water is more then doubling that. Living in Durango, a lot of people ski and snowboard on their free time. I was never aware of how prevalent avalanches were when backcountry skiing.

Throughout this unit the skill that I became most engaged to was synthesizing and applying knowledge. Usually the projects that we do really have no relevance for me and I think that this project really allowed me to take this research and use it outside of school. Also making this poster really allowed me to see the impact that this knowledge gave. One thing that I particularly enjoyed during this project was making the poster. As a group, we both decided it would be better to make diagrams of a mountain instead of just writing the information. Overall the visual elements of the poster were fun. The thing that I didn't like about this project was the narrowed audience that the learning applied to. Not everyone in the school had any sort of connection to it, if they don't do any winter sports.

We collected data by recording the angle, hang time,distance and the pressure we used. We chose to display our data in a scatter plot graph because we felt that it represented how are rocket traveled due to our variable.Description of your rockets, including justification of your design:


First, we took a 2 liter soda bottle and used that for our base. We decided to just use one solid container instead of attaching two cause when we first started and made it out of two there were a lot of leaks and other issues. Then we took the nozzle end of a separate bottle and attached it to the closed end of our rocket so it would be more aerodynamic. After this we put 4 fins along the middle of it in the shape of a triangle in order to give it stability.


Pictures of your test subjects:


An explanation of how/why you chose your testing variable:


Our testing variable was pressure, we chose this as our variable because it was something not everyone was doing. We felt it was the best measure due to the circumstances of all our different rockets. Also it was the easiest to keep the other parts of it constant so it was more exact and not as unreliable. We tested it with the pressures 70,80,85, and 100 and found that 85 worked the best out of the 4 different ones.

Our question was: What PSI will make the rocket go the highest?

Is your hypothesis written in proper form( if...then...because):


Our hypothesis: If pressure affects the height a bottle rocket projects into the air, then the higher the pressure the higher the rocket will go because with more pressure help in the bottle when released it will have greater momentum.

Procedure: a detailed explanation of your testing procedure, with attention given to how all other variables are kept constant other than the one you were testing.


Explain how you went about testing your variable, be specific!

(this is also a good place to put a picture)

What we did to test our rocket is that we started at the psi of 70 and increased each time by 10 and 5 each launching. We did for test launches. After each testing we would record the angle of elevation, the hang time, and height. At the end we compared out results to see which one had the greatest height that we could use to launch.

Make a list listing all the variables that you kept constant and what those values were.


Explain any variables you weren’t able to keep constant


Data: Publish a raw data table and a nice graph showing the relationship between your independent and dependent variable .


Data table includes all information you collected while testing 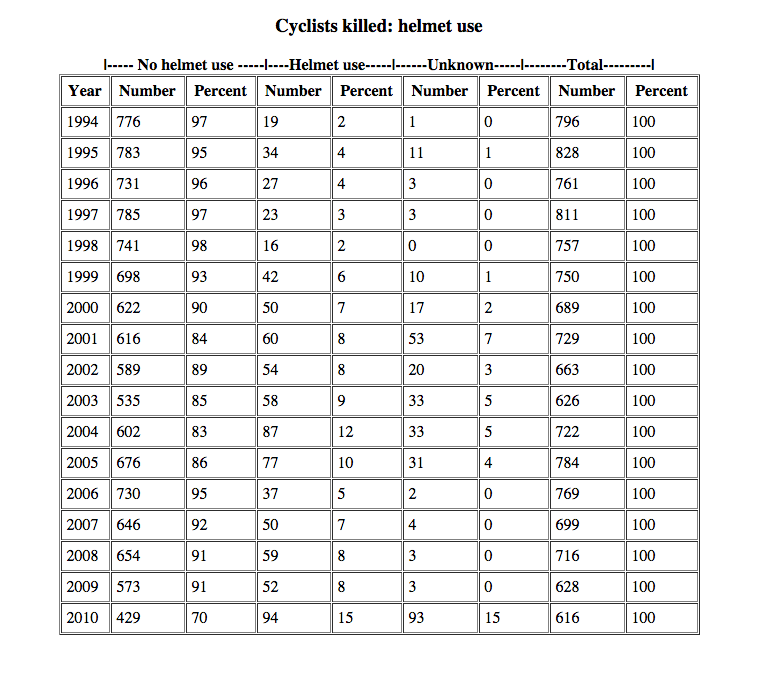 Concussions occur when the head is impacted and the brain continues forward because of Newton's Law, an object un motion unless acted upon by an outside force. In this case the brain stays in motion when the skull hit. This causes the brain to hit the front of the skull which can bruise or damage the brain. Normally cerebral spinal fluid acts like a cushion around your brain which keeps it from colliding with your skull. When you have a concussion the brain actually hits the frontal lobe or on the two sides of the brain or sometimes the back of the head. Once the brain collides with the skull it can cause dizziness, blackout, or confusion depending on  where the impact occurred. This can be caused by simply falling off your bike and hitting the ground with your head, or even running into any solid object. Not wearing a helmet can majorly affect the amount of damage done to your head.

When worn correctly, a helmet can make a huge different when the head is hit. When an impact occurs, the idea is that the helmet helps disperse the force all around the head instead of directly on that one area. The helmet takes the impact force and transfers it around your head rather then transmitting that force into your head. Helmets also help by crushing the outer foam layer which increases the heads stopping time by about .06 of a second. This will make the injury less severe.

When it comes to the brain or head injuries, it doesn't take much for a person to get severely injured or even killed. In 2010 a study showed that just by wearing a helmet when biking it can reduce the chance of death by around 55 percent! (bike helmet safety institute)

In 2012 over 700 people were killed (iihs) but most of the fatalities result in not wearing helmet. This was just in biking accidents as well, even more people were killed if you include all sports. Biking can be one of the most dangerous sports if not wearing a helmet. Just by strapping on a light piece of foam over your brain may just save your life. 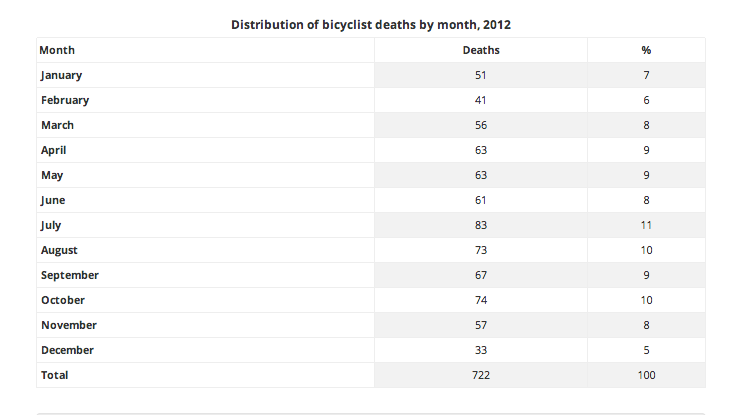